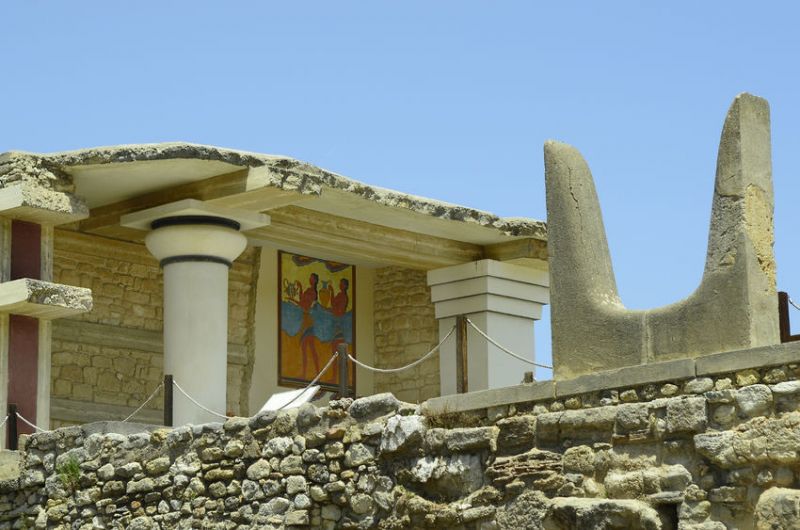 The island of Crete has been the birthplace of the bright Minoan civilization during the Bronze Age (from ca. 2000 BCE until ca. 1500 BCE), described as “the first link in the European chain”.

Due to island’s location in the middle of the Mediterranean Sea, Minoan built a great naval and commercial power of the ancient world. It was named Minoan by the mythical king Minos, the son of Europe and Zeus. In fact, Minos called all the kings of Crete for many centuries. The Minoans traveled all the Cyclades and Aegean and reached up to the Near East and Egypt to sell their products like oil, honey, wine, and bring copper, silver, gold, ivory and precious stones to Crete. The English archaeologist Evans was the first to excavate and discover Knossos Palace, which confirmed the ancient accounts, both literary and mythological, of a sophisticated Cretan culture and possible site of the legendary labyrinth. Knossos looked like a whole town, huge and complicated, a real labyrinth built around a very large yard. It had many buildings within four and five floors and one thousand five hundred rooms decorated with magnificent frescoes, depicting flowers and birds, fish, dolphins, princess and princes, a life lived in peace and prosperity. One of the most beautiful rooms was the throne room. The Minoans were happy people. They enjoyed life and loved nature. Many of the men were traders, fishermen and sailors, craftsmen and artists. Women are known for their elegant and luxurious appearance. They wore fancy long skirts, short aprons, thin shirts, coats and jewelries , dying and combing their hair with care, just like today's women. They had the same freedoms and the same rights as men, taking part equally in festivals, competitions and hunting. The Minoans worshiped the bulls and the symbols of their religion were the holy horns of the bull (Minotaur) and the double ax. They were also one of the first who used a scipt, discovered their hieroglyphic writing in Phaistos Disc. The rise of the Mycenaean civilization in the mid-2nd millennium BC on the Greek mainland is more likely the reason of the demise of the Minoan. Other suggestion includes the Minoan eruption theory, a massive tsunami generated by the Thera eruption(nowadays Santorini) devastated the coast of Crete and destroyed many Minoan settlements.