Matala is a small and quiet fishing village located in Southern Crete, in Heraklion Prefecture, the place where according to mythology Zeus swam ashore with Europa on his back. It is a natural harbor in the middle of Messara Bay, which is the largest in Crete. It is a central hub for many travelers, as it sits amidst and provides connections to a wide range of natural and archaeological attractions.

The famous beaches of Galini, Kokkinos Pirgos, Kalamaki, Kommos, Kokkini Ammos, Vathy, Agiofarago and Kali Limenes are all within a few kilometers’ distance. Kokkini Ammos is just outside the village towards the south. Moreover, Phaistos, the second most important center of Minoan Civilization, where the legendary “Phaistos Disk” was discovered, is just a few kilometers away from Matala. Matala was the port of Phaistos during the Minoan period. The village itself is very picturesque even though the marks of touristic development are evident. It has plenty of taverns, restaurants, shops, coffee shops and a beautiful 250 m long beach with pebbles and amazing waters. It is also one of the 400 beaches in Greece that have been awarded a Blue Flag. Half the beach is fringed by tamarisk trees, leading the eye on to impressive formations of sandstone rock cliffs. In the cliffs there are artificial cavernous spaces (and underwater caves), carved into the rock. It is said that they were tombs. But some have rooms, stairways, windows and porches. So it seems that once were used as residences. Matala acquired its popularity during the 60s and 70s, when the hippies discovered and “took over” the place promoting a relaxed and joyful life stance which remains until today. Most of them found residence in the cliff caves. It was in that period when Joni Mitchell wrote the song Carey praising the Matala moon (“… The night is a starry dome, and they're playing that scratchy rock and roll, beneath the Matala Moon…”). 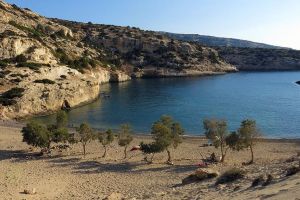 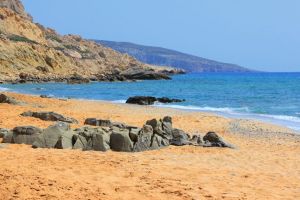