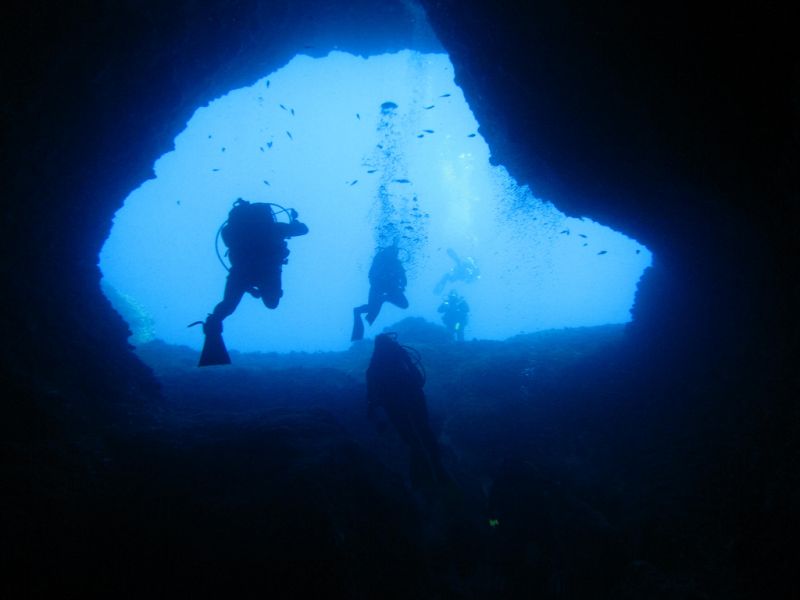 The greatness of nature and the hidden secrets of Crete are not rare, all you need is time and inspiration . An extra ordinary experience is hidden beneath the village Kokkino Chorio, in Drepano area of Akrotiri, in Chania prefecture and out of Souda Bay. It is a unique subterranean cave, the one and only in the island, with magnificent otherworldly beauty and still unknown to many, waiting to be discovered.

It was found in 1999 accidentally by a snorkeler and named after the findings of the bones of elephants that belong to the new species elephas chaniensis. This particular elephant did not belong to any known species, not even those that have been discovered elsewhere in Crete, Cyprus or mainland Greece! Another interesting element is the deer bones found also in the cave, which belong to deer of the standard size but also to little kind of deer 30 cm high.

The length of the cave is 160 meters and the entrance is about 10 meters below the sea level. Its bottom is completely covered with water, shallow in some areas and deeper in others, reaching even four meters depth. The ceiling of the main chamber of the cave is decorated by beautiful stalactites with reddish colour, due to the aluminum and iron content. Stalagmites are also rise from the floor of the cave that is covered by water, something that indicates that in earlier times the cave was dry.

The Elephants Cave that once was a home for rare elephants and deer , is full of surprises, besides its stunning beauty. The visitor can admire the splendid decoration of stalactites and stalagmites, as well as seeing fossilized elephants and bones that have become parts of the rocks of the cave. In order to visit it, you need to dive. The diving takes place in the cave through diving centre and the experience will be unforgettable.